OmJah spirit is the dog at your side

the bird in your ear

the butterfly in your heart

OmJah spirit is the delightful surprise

the gaze of your beloved

the laughter of your child

the life song you sing

We think of meditation as stillness . . . and most often it is. There are meditative states that can be achieved in motion too. This post references three versions:

For some yoga itself is meditation in motion.

There are many ways into kinetic meditation. All seem to embody a flow experience.

Lighting candles, drawing a bath, immersing in it.

Sufis of the Mawlawi order whirl themselves into an ecstatic communion state.

For me during the non-winter months, there is treading water.

You can always tell an artist . . . we get reallllllly close to it.

We want to figure out how it’s done — we want to take it all in.

True. True also for you. You can always tell where the art in your life is, by how close you get to it, by when you want to take it all in.


If you’re among that 1% . . . you’ve tried it, you don’t get what everyone’s yammering on about, I get it. I have people in my life I’m close to who think running excruciating distances is cool.And they seem to think I should do it too. With them. Next Saturday.

Here are three alternatives to meditation that will bring you to a similar space:

Alone. A walking buddy is fine when your intention is comaraderie while exercising. As soon as you add a compadre you’ve jettisoned the meditative quality no matter how much you bliss each other out.

Twenty to thirty minutes. The tempo over time lulls you into an otherworldly place, that place where you sidestep your active mind and open the stargate into your inner wormhole.

Notice things. Once you begin to note and notice, you can’t help but appreciate — and we all know where that leads — more appreciation!

I know these are the first two words in a dreaded modern dysfunction, so hear me out. Decades ago I read about how an ice tribe entered an altered state — it was the Inuit I believe (confirmation pending) (confirmation may be pending for some time).

An individual sat, took a stone or implement and carved a circle lightly in front of him/her in the ice . . . and continued to lightly trace the circle, repetitively.

I’ve done this in the dirt with a stick, my god it’s its own kind of intoxication after a while. You let your mind go into the circular motion . . . and before you know it your mind has gone entirely, in a good way.

I honestly couldn’t think of a better description, though I know there must be. It’s suggestive I’ll grant you, the title, but the process is not.

Here it is: Pick up a stone or shell or smallish object that easily lays in the palm of your hand, something whose texture intrigues you, be it smooth or feathery or pitted or uneven. Better yet, pick up a spirit stone! Ooooh.

Fondle it. Run it between your fingers. Trace it’s contours. Feel it, engage with it, palm it, enjoy it. Turn it over in your hands, find its mystery, it’s a portal into your own.

You perhaps have noticed by now there’s a commonality between the three methodologies and it’s not my overly suggestive languaging.

This is what you’re after afterall. You want to soar aloft, beyond the mental fray. Try one of the above sometime, just for the fun of it. Any one of these methods can be a slipstream into the Stream of All That Is Good.

Five years ago I found myself sitting poolside one too many times. For the first time in decades a lethargic ennui overtook me . . . I was bored.

Then the 2008 crash happened. In the aftermath my body-mind played host to many moods in the ensuing months and years — none of them was boredom.

So that’s one cure.

A second is engagement.

Though on the surface now, post crash, what you can see — of our living circumstances, our financial condition, the vehicles we drive — appears to be far worse, it’s not true.

I have a teenage crush on life now.

Crisis living is one cure for boredom. So is engagement living, with far better results. 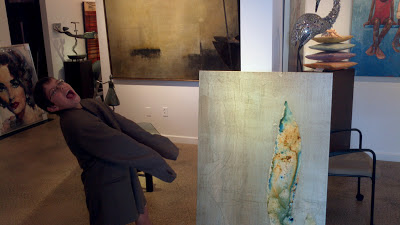 thank You
for this eternal unfolding

Moments ago I was gazing at my latest spirit stone, admiring the fine pinprick holes that shoot through it. It was then I realized I like my stones the way I like people’s lives — I like them with holes in them.

There’s something about a life that’s had some holes blown through it. There’s no pretending when you walk around with a hole in your life. No matter what you must grapple with the hole, and what existence means to you now.

The hole could be awful: ruin, addiction, infidelity. It could be god awful: death of a child, loss of a limb, loss of meaning. It could be so many things.

I had a hole-less life, more or less, until our business foundered. Yes, I had a some difficulties in childhood with alcoholism (not mine), but other than that I was a golden child shooting across the planet on a star.

Here’s the thing about holes. If you can find exuberance after a hole’s been blown through you, you’ve got life by the whiskers.

What is it about a light wish? Have you noticed the fulfillment of lightly held desires seems to waft in almost effortlessly, as if on a breeze?

An example from my own little life:

Not a year ago I found myself wishing for a compadre engaged in something similar to what I do here, this blogging life. It was a specific wish. I’m fond of  breakfast buddies, and that’s what I wanted. Breakfast is that rare time I can fit in friends easily when business and family and writing dominate so much else.

I found myself wishing — lightly, as in a day dream — for a breakfast buddy with whom I could share this writing life. Touching base, sharing anecdotes, lessons learned, that kind of thing.

As if in response along came a now friend, a then stranger, who though not a blogger was also engaged in uplift and websites and such.

And now, just this past month, an inspirational figure who moved away four years ago has circled back . . . and this light wish has become a solid real thing in my life. Surprisingly it’s even better than what I’d hoped for.

Here I am now one morning a week, with this circled-back friend, sitting across from one another tapping away on our respective keyboards. We engage on our separate projects in mutual creation mode. That and in in between moments we toss off thoughts about what we’ve gleaned along the way.

It’s unsurprising as well:  I’ve come to expect richer experience than my quite finite mind can formulate — particularly when there’s no great weight attached to weigh the wish down.

There is magnificence lurking in everything, even pain.

Think of all that had to come first to get to you.

Some kind of incalculably colossal explosive burst of energy. (Some call it The Big Bang, some call it Let There Be Creation!) (And why yes, for the latter, so far it’s only me . . . .)

Elements had to coalesce. So did stars. And their large roundish orbiting masses. (Called planets.)

Sparks of life had to appear. At least one of them had to survive. And replicate! Replication is a fun activity now, maybe not so much back then.

All sorts of life forms had to experiment their way into being: amoebas, slime molds, plants, animals, hominids, hobbits, humankind.

Now here you are, you beautiful thing.

There’s only one way to let the universe down: By not opening yourself up to the experience of this creation, you and all that surrounds you.