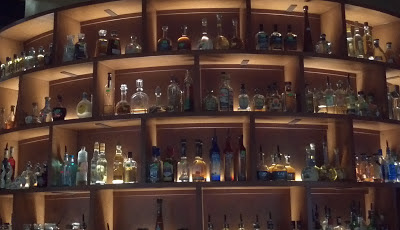 What would you imagine it to be? Drink? Drugs? Drama? Sex?

You know you want it to be one of those, I know I do, it makes for momentarily interesting reading . . . . Even though I’m long past romanticizing it for myself, there’s some kind of misery magic that lures us into suspecting that’s how it works for others.

Nothing illuminates like a parade of work habits from dozens of history’s greatest.

Over 150 creative titans are profiled, from choreographer Twyla Tharp to architect Frank Lloyd Wright to poet-autobiographer Maya Angelou (she works in a hotel room!) to artist Pablo Picasso and so many more.

Though drink and certain classes of drugs certainly make their appearance in some of the lives profiled, for example . . .

By the 1950s, too much work on too little sleep — with too much wine and cigarettes — had left [existentialist philosopher Jean-Paul] Sartre exhausted and on the verge of collapse. Rather than slow down, however, he turned to Corydrane, a mix of amphetamines and aspirin . . .

. . . there were two things that stood out repeatedly in my reading, so much so they began to seem like the holy grail for all creatives:

Setting up a creative work routine seems to beg the obvious, though possibly only because of feverish Hollywood depictions regarding the artistic temperament, which might cause us to believe artists to be wildly spontaneous and not given to establishing a work regimen.

That would only be your wanna-be acquaintances.

In the art world I inhabit, artistic individuals who want a career labor as determinedly as any would-be mogul.

Just like everyone else you know, for creatives there’s a need for breaks and munching and frolic . . . naps and lunches and conversations and even taking time off to watch a soap opera.

But what was truly revelatory is the sheer number of those who find taking a walk essential to their creative genius.

It makes sense. Activity is good for the body-mind. Walking particularly is one of the very few activities this side of yoga that is contemplative in nature.

Taking a walk is soul connecting . . . and body flushing, flushing one’s system of the detritus of the day. It’s no wonder one of the simplest forms of movement is also one of the most enriching.

Here are a few excerpts from Daily Rituals to inspire you:

In the late afternoon he went for a walk or took the ferry to a neighboring island . . . “I never use drugs or alcohol,” Bergman said. “The most I drink is a glass of wine and that makes me incredibly happy.”

I get up at six in the morning. I compose until eleven, then my day is over. I go out, I walk, tirelessly, for hours.

After a midday dinner, Beethoven embarked on a long, vigorous walk, which would occupy much of the rest of the afternoon. He always carried a pencil and a couple of sheets of music in his pocket, to record chance musical thoughts.

Typically, he wrote in the morning, set off on a long walk through Copenhagen at noon, and then returned to his writing for the rest of the day and into the evening. The walks were where he had his best ideas . . .

After dinner, Freud went for a walk around Vienna’s Ringstrasse. This was not a leisurely stroll, however; his son, Martin, recalled, “My father marched at a terrific speed.”

[At his writing retreat] . . . He generally set aside two hours in the morning for concentrated writing. The rest of his day would be spent painting or meditating in his private study, going for long walks in the hills, receiving visitors, and replying to the never-ending stream of letters that arrived each day.

After lunch, Mahler would drag Alma on a three- or four-hour-long walk along the shore, stopping occasionally to jot down ideas in his notebook, beating time in the air with his pencil.

Then he would wake early, eat breakfast, and write at his desk all morning . . . After a noon lunch, he would continue repairs on the house and take a long walk or go horseback riding.

To break up these long hours of private study, Edwards engaged in daily bouts of physical activity: chopping wood in the winter, walking or horse riding when the weather was good. On his walks, he carried a pen and ink to record his thoughts.

. . . then ten minutes of exercises, naked at the open window [lucky Prague], then an hour’s walk — alone, with Max, or with another friend . . .

His entire life revolved around his almost psychotic obsession to write. The siege began with an epiphany. On a late-night walk near Dublin harbor, Beckett found himself standing on the end of a pier in the midst of a winter storm. Amid the howling wind and churning water, he suddenly realized that the “dark he had struggled to keep under” in his life — and in his writing, which had until then failed to find an audience or meet his own aspirations — should, in fact, be the source of his creative inspiration.

Part of the What creators do series.

Solving a problem: What creators do Why books matter in this info proliferation era
Scroll to top