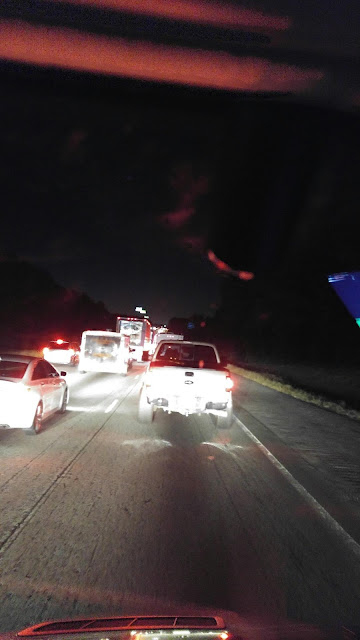 I was able to make it all the way to Atlanta from South Florida as I fled the hurricane. Because I rose early in the deep dark. To head out of town while everyone else still slept.

A friend who waited till the last minute spent 6 hours on one stretch of highway later in the day.

A business acquaintance from Charleston called me near the end of the drive. His business was now in Hurricane Matthew’s crosshairs . . . he had no shutters, wood panels had long been bought up at Home Depot, he carried no insurance for a warehouse full of clients’ furniture he was shipping for them.

He was frantic. He could lose it all. This business he’s steadily built up over a couple of decades.

The people who are far more successful than I am tend to be better at buffering.

A buffer is a shock absorber. That thing built into your system that absorbs impact when it comes.

It looks mundane, even tedious, maybe even a leech on your time.

Shocks come. Whether your road is punishing or merely bumpy often has to do with the buffers you put in place.

Meditation is my favorite buffer. I’m a mental jackrabbit. And not in a good way. My brain just loves to poing from one thing to another.

Daily meditation morphs that rabbit into a lap dog. Still frisky at times, but willing to settle in with a thought, a focus. Able to hold an idea through to its fruition.

Exercise is a buffer. You ward off shocks to your organism far better.

Saving is a buffer. God don’t I know this one! I’ve learned this from both ends, from failing in one instance when I hadn’t saved enough . . . to surviving barely in another because we had a buffer in our bank account. Unlike many of our competitors who went down.

Connection is your greatest buffer. Spiritually and relationally. When you’re connected to your greatest resource, nothing can break you.

You’d  be surprised how often your people connections will save you. With an idea, with assistance, with belief in you when you no longer have it for yourself!

I thought of buffers as I drove in advance of the hurricane, heading north. I’m thankful for the buffers we’ve built up . . . and I’m wondering what other buffers I need to put in place.

You’ve heard of the six-month emergency fund. For a business I recommend one year . . .

Two years is my ideal. We’re slowly working our way back to that place since the Crash. Everyone else calls it the Great Recession. For me, for us, it was a spectacular unspooling crash.

And what helped save us were the buffers. The buffer of family. The buffer of friendship, even if it often meant offgassing the woes. Of finances. Even though they didn’t last as long as we ‘d expected. The buffer of spiritual connection helped the most day to day.

(Moral: don’t put your buffer in the stock market, you may end up with 40% of a buffer right when you need it the most.) (Oh happy days, learning these lessons : )

Whether you had a good hurricane experience or a bad one may have come down to one factor: The buffers you put in place.

It’s never too late to buffer it up, one bitty bit at a time.

You’ve got to get messy